The Il-114-300 airliner is designed for operation on local routes. It is an upgraded version of the turboprop Il-114. The aircraft will be manufactured at Russian aircraft production facilities.

The program of modernization and restart of serial production of the regional airliner Il-114-300 is carried out pursuant to the instructions of the President of the Russian Federation of August 9, 2014 and November 3, 2015. The objective of this work is to provide the domestic air transport market with modern domestically manufactured aircraft in the class of passenger aircraft with 52-64 seats and up to 7 tons of payload.

The Il-114-300 airliner is designed for operation on local routes. It is an upgraded version of the turboprop Il-114. The aircraft will be manufactured at Russian aircraft production facilities.
The flight crew consists of a pilot-in-command and a co-pilot. For successful performance of the flight crew the Il-114-300 is fitted with digital flight-navigation suite ensuring take-off and landing under weather conditions which conform to ICAO category II standard. All flight-navigation information and data on aircraft systems performance is delivered to five LCD displays.
Modern passenger cabin ensures comfortable flight in the entire altitude range.
The systems are configured in such a way that failure of one system does not influence the performance of others. They have the necessary level of redundancy and employ well-proven materials.
The implementation of modern scientific and technical achievements in the Il-114-300 in maintaining the required levels of aerodynamic and mass perfection of the aircraft and power plant, provide the aircraft with high fuel efficiency.
Aircraft landing gear provides landing on non-equipped aerodromes with concrete or unpaved runways which contributes to expansion of the Il-114-300 usage in different regions.
In addition the aircraft is designed for independent operation at non-equipped airports. The Il-114-300 has integral passenger airstairs. Access to all structural elements and units, inspection of which is required by maintenance program, is quick and easy.
For the Il-114-300 there was adopted a condition-based operation system without overhauls, which allows maintenance of necessary flight worthiness with minimal operational costs within design life of 30,000 flight hours or 30,000 flights and service life of 30 years. 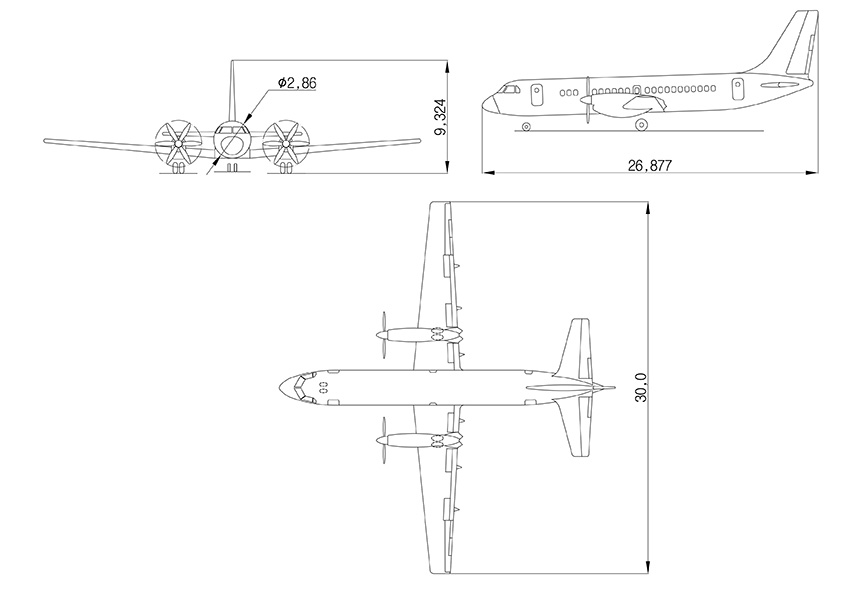