The baseline design of Be-200 amphibious aircraft is intended for aerial wildfire-fighting using water or fire-extinguishing liquids. This includes the following objectives:

Stopping the spread, and containment, of moderate and large forest fires by creating a barrier with multiple drops of an extinguishing fluid at the edge of the fire;

The elimination of small and newly-started forest fires; the delivery of firefighting teams and equipment to disaster areas with landing on a preselected water surface or airfield, and subsequent extraction.

Additionally, the airplane can perform:

The Be-200 can be reequipped into the following versions quickly and with minimum cost:

All firefighting capabilities are retained. Work on a business-version design are underway.
The Be-200 can operate from Class B airfields with a runway length of 1,800 m and from a water surface at least 2,300 m long with a water body depth of at least 2.5 m. The airplane can take off and land on water with a wave height of up to 1.3 m, and special anti-corrosion treatments enable operation of this airplane in maritime conditions.

In areas with underdeveloped ground infrastructure, the Be-200 may be deployed on a 130 x 70 m paved area equipped with a slipway. The Be-200’s detailed design was completed with consideration of FAR-25 airworthiness standards (USA), which will facilitate certification of the airplane in accordance with FAA and JAA standards.

The Be-200ES-E is fitted to the requirements of the Russian Ministry of Emergency Situations, and is intended for the following main applications:

There is currently no maintenance interval set for the airplane and it is maintained as condition requires. Its assigned service life is 30 years.

The Be-200 can hold up to 12 tons of water. The airplane can be filled with water at an airfield using a hydrant system, or it can scoop water while skimming the water surface and fill its tanks in 14 seconds. The airplane is fitted with tanks for chemical liquids with a total capacity of 1.2 m3.  Water can be dropped in a single salvo, or in consecutive drops by opening the water tank doors in sequence.

Thanks to its high speed, the Be-200 offers high fire-suppression capacity in terms of the number of water drops per hour. With an airfield-fire distance of 100 km and airfield-water body distance of 10 km, the airplane can drop up to 270 tons of water on the fire. The high rate of climb is a significant advantage when it comes to fire suppression in a narrow space, for example, in mountainous areas, or when scooping/dropping water in areas with obstacles present.

The development of amphibious design was initiated in 1990 under the design leadership of Alexander Yavkin, Chief Designer of the G. Beriev Taganrog Design Bureau, based on the A-40 Albatros amphibian from which the Be-200 differs with its smaller dimensions. The airplane was first demonstrated at the Paris Air Show in 1991.

The first customer for the Be-200 was the Russian Emergency Situations Ministry (EMERCOM). EMERCOM signed a framework agreement in 1996 for the delivery of Be-200 airplanes for the EMERCOM fleet. The agreement for the purchase of 7 Be-200 amphibians signed by EMERCOM in 1997 was transformed into a Governmental Procurement Contract with a total value of RUB 5 billion in 2001. The contract not only provided for the purchase of airplanes, but also contemplated initial steps to set up infrastructure: establishment of training centers, provision of ground servicing equipment, establishment of maintenance bases, setting up an amphibian base in Gelendzhik or Taganrog, etc. There were also plans that the corresponding research institutes would be tasked with the examination of water bodies as potential bases for the deployment of Be-200s.

The Be-200 multi-purpose amphibious aircraft was demonstrated for the first time at the 4th international exhibition of ship-born and sea aircraft Gidroaviasalon 2002, held in Gelendzhik on September 4-8, 2002. Russia's new amphibian set 9 world records there.

The Be-200 was demonstrated in France, Germany, Italy, Greece, Malaysia, China, India, and the United Arab Emirates. It was engaged in wildfire suppression missions in Russia, Italy, Portugal, and Indonesia. One of the best examples of the successful operation of the Be-200ES was in Italy in 2004-2005 within the framework of an agreement between the BERIEV Aircraft Company and SOREM, the operator of firefighting equipment officially designated by the Department of Civil Defense of Italy (Protezione Civile). An agreement for the lease of Be-200ES was made by the BERIEV Aircraft Company and National Fire and Civil Defense Service of Portugal in 2006. Under the agreement, the Be-200ES amphibian would be used in wildfire suppression missions in mainland Portugal. It was piloted by French, American, and Italian pilots, and all of them highly praised its performance and capabilities.

The joint venture CJSC BETA IR was set up in August 2005 for the implementation of a program for the Be-200 amphibian’s promotion on the global market, which joined European concern EADS, Irkut Corporation, BERIEV Aircraft Company and Swiss company ILTA Trade Finance SA. The marketing of the Be-200 in Asia and Pacific was implemented jointly with Malaysian company DRB-HICOM Defenсe Technologies SDN BHD.

A Be-200ES fitted to the needs of the Russian Emergency Situations Ministry was developed based on the Be-200. Apart from fire suppression, the equipment carried by Be-200ES allows it to pursue a wide range of missions, including the detection of disaster spots, and search-and-rescue operations on water and in coastal areas.

The first production of the Be-200ES amphibian operated a flight from an airfield near Irkutsk on June 17, 2003; since then, it has remained in service as part of EMERCOM fleet. Four produced airplanes have already been delivered to the customer. In addition to the Be-200ES, cargo/passenger and patrol versions are envisioned.

The Be-200ES successfully passed certification tests for ambient operating temperature range (-36 degrees C, -42 degrees C, -47 degrees С and -52 degrees С), which were conducted from January 30 to February 19, 2004. The target time required to make the airplane ready to fly was determined for each test temperature.
In 2007, the management of Irkut Corporation made the decision to transfer production of the Be-200 from the Irkutsk Aviation Plant (IAZ) to the aircraft production site in Taganrog (JSC Taganrog Aviation – Tavia), taking effect from 2008. The decision to transfer was due to the fact that the production site in Irkutsk had been burdened with the performance of contracts for the production of Su-30 multi-purpose airplanes and Yak-130 operational trainers.

Russia now has six Be-200 airplanes in total (four have been handed over to EMERCOM, with two test airplanes owned by BERIEV Aircraft Company).

In 2010, the BERIEV Aircraft Company and the Ministry of Emergency Situations of the Russian Federation signed an agreement for the delivery of new Be-200ES airplanes.

The Be-200 marks a brand new step in the production of amphibious aircraft. The plane has no rivals in Russia and, most probably, once it has been certified internationally and customized to the customer’s specifications, the Be-200 will face little or no competition in the world.

The multi-purpose amphibious aircraft Beriev Be-200 represents a new generation of amphibians. The most recent achievements in the field of hydrodynamics have made it possible to design the Beriev Be-200 with aerodynamics no worse than those of land-based transport aircraft of a similar class.


The airplane is made according to normal aerodynamic design, with a high-set wing, Т-shaped tail unit, two under-wing stabilizer floats, and hull with a high length-to-beam ratio and variable rise.

The wings of the Be-200 have been provided with well-developed take-off and landing devices. An automatic flap re-extension system has been applied that sets flaps to the take-off position during take-off at high speeds only, when the height of splash water is considerably lower.

Ukraine-based Progress Engine Design Bureau and JSC Motor Sich have designed and manufactured a special “maritime”  corrosion-resistant version of the D-436 three-shaft turbofan engine for the Be-200 amphibian. Two such engines are mounted above the wingroot pods on the landing gear fairings to prevent water spraying into the engines during take-off and landing.

What distinguishes the Be-200 from other amphibious aircraft is its completely sealed hull, which allows for its use in a wide range of circumstances. For the first time in the history of domestic amphibian-aircraft production, the cargo cabin is pressurized along the whole hull length, while all of the components of the special fire-suppression system, including large water tanks, are accommodated under the cargo floor.

The up-to-date АRIА-200М integrated avionics system provides navigation and flight control in adverse weather conditions, anywhere in the world, as well as at any time of the day and in any season – in compliance with ICAO Cat. III requirements. The system’s open architecture allows changes to be made to its configuration to suit the customer’s requirements. All information for the two-pilot crew is displayed on six multi-functional color LED electronic displays arranged on the instrument panel. Conventional instruments are used for back-up only in case of possible electronics failure.

The Be-200 boasts high maneuverability and handling characteristics, which are vital for any fire-fighting aircraft. The Beriev Be-200 is the first airplane produced by BERIEV Aircraft Company to be fitted with an EDSU-200 three-channel fly-by-wire system. The crew compartment is equipped with “fighter” control sticks instead of conventional control wheels.

A special fire-fighting system able to scoop water to tanks at skimming speeds of 0.9 - 0.95 of the take-off speed has been designed specifically for the Be-200. The Be-200ES version differs from the baseline version due to the availability of additional equipment. A new EDSU fly-by-wire system and SPU-200ES intercom system, AOS airborne observation system, SGU-600 external audible warning system and SX-5 floodlight have been installed. Seats for two observers are provided in the cargo cabin, which are fitted with teardrop windows for the visual search of targets, as well as an Orion-25S inflatable boat and cargo equipment. The walls and ceiling of the crew compartment are covered with decorative panels made by AIM Aviation (UK). 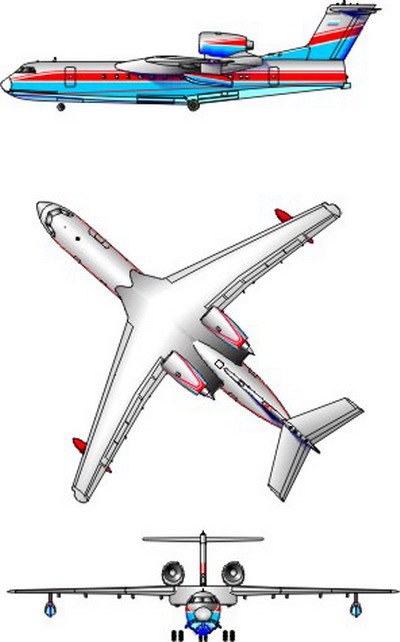